Skip to content
Home/Backyard Services, Tips and Advice/Creating Defensible Space – How to Prevent Another Firestorm

Creating Defensible Space – How to Prevent Another Firestorm

The hills of Oakland, California experienced a devastating fire on October 19, 1991 that killed 25 people and burned more than 3,000 homes. Fire previously struck the same area in 1923, 1970, and 1980, yet people continued to build and live there and live in densely wooded areas with little or no defensible space. Each fire occurred in autumn during  a year with little precipitation. Residents had little warning each time. Despite the danger, they continued to move back into their homes as quickly as possible after each fire.

History of the 1991 Oakland Fire

The firestorm originally started in a single home. Although firefighters responded immediately to stop the blaze, they didn’t notice that the fire’s heat caused large quantities of pine trees on the property to drop their needles on the ground. The pine needles then began smoldering undetected for the next few hours. The dryness of the area and the intensity of winds made for the perfect storm.

Most of the 3,000 homes damaged or destroyed by fire sat on such a steep hill that made it extremely difficult for firefighters to move their trucks and equipment close enough to effectively coordinate and communicate. The windy streets in this Oakland neighborhood are also very narrow, further complicating the firefighters’ efforts to get near the homes. It took multiple days to fully contain the fires.

Oakland suffered $1.5 billion dollars in property damage in addition to the devastating loss of life. Since that time, firefighters, city planners, home builders and others have tried to learn from the experience by creating defensible space. Property owners who maintain defensible space have a much higher likelihood of surviving a wildfire without injury or losing their home.

A defensible space around a home helps to protect residents from the effects of a wildfire. The term refers to deliberately leaving space between the home and grass, trees, shrubs, and any wild land area that surrounds the home.

When implemented correctly, defensible space can prevent the home from catching fire or at least significantly slow its spread. It also helps to protect firefighters from danger if they ever receive a call about a blaze on the property. California now mandates at least 100 feet of defensible space around each home. Note the useful image explaining the concept of defensible areas from utility provider, PG&E: 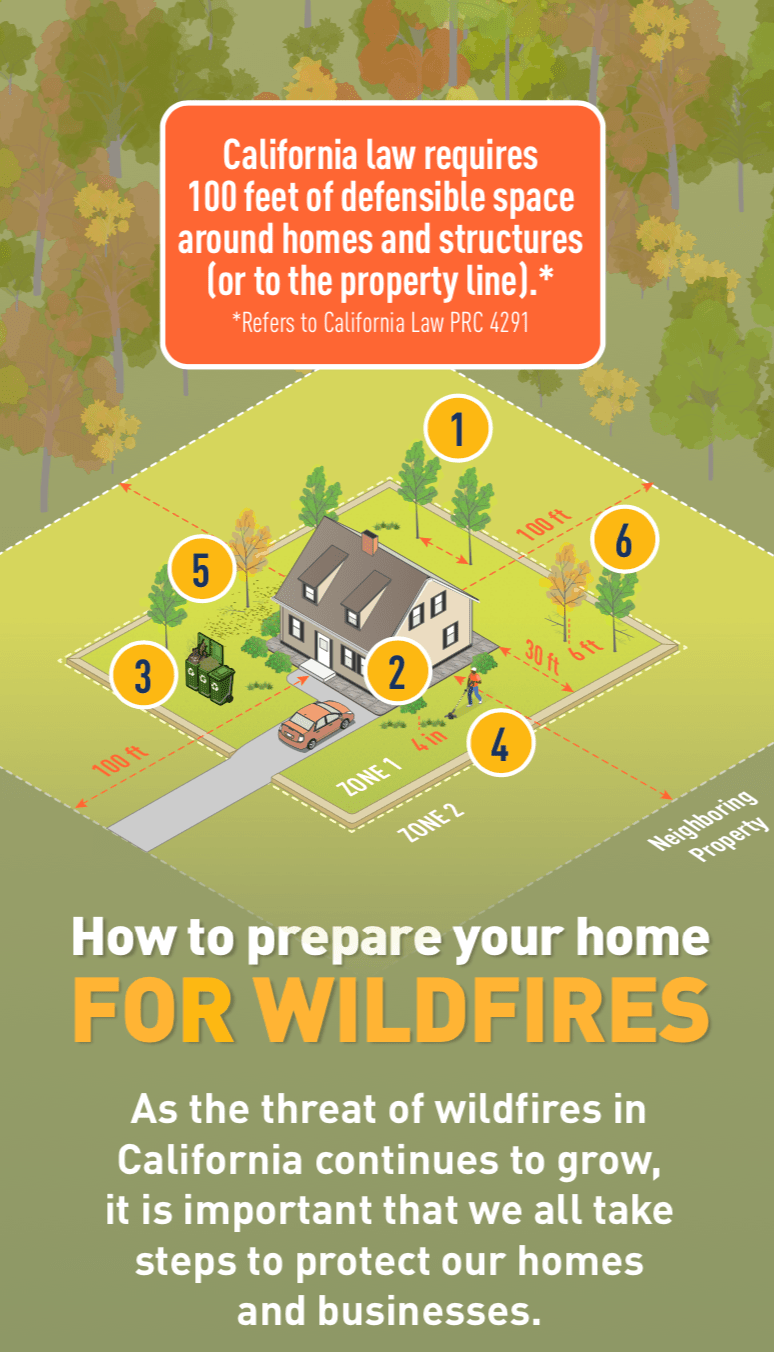 Improving safety at home in case of fire doesn’t need to be complicated. Here are several steps recommended for creating a defensible space:

The effort homeowners make creating defensible space in their yard will provide them with valuable peace of mind regardless of where they live.